Not to be confused with Clay Bar, which removes contaminants from the paint, Paint Correction is the removal of paint imperfections caused by fine scratches, swirls, holograms, and oxidation, which makes your car paint cloudy or hazy. Oxidation is due to a lack of regular waxing or the proper application of a protective sealant. Holograms are caused by heat from a rotary buffer that leaves your clear coat looking smudged.

Your Clear Coat is a Barrier

Your clear coat protects your paint, so it is appropriate that it take the brunt of any flying road debris, including sand and grit, which often leave scratches on the lower panels, bumper, and body side moldings of your car. Hauling Christmas trees and other items, as well as lightly swiping up against almost anything like shrubs and clothing, will cause scratches on your paint.

Ironically, however, the most common culprit for fine scratches, swirls, and holograms are automated car washes and inexperienced detailers! In spite of innovative soft-brush technology, some car washes still leave fine scratches and swirl marks, which are just micro-scratches, on your clear coat, usually after repeated use. Older model car washes are notorious for it.

Inexperienced detailers and Do-it-Yourselfers are often the worst offenders. They often fail to rinse thoroughly the dirt off the vehicle with a lubricating shampoo before scrubbing, which results in the dirt itself acting like an abrasive. In addition, using dirty rags, sponges and towels when washing and drying, grind the dirt into the clear coat causing fine scratches.

Holograms are deeper than scratches and swirls and are caused almost exclusively by an inexperienced buffer-wielding detailer with little training in the finesse of controlling heat with a rotary buffer, causing distortions in the clear coat that are difficult, but not impossible for paint correction professionals like Galaxy Auto Detailing to get out. 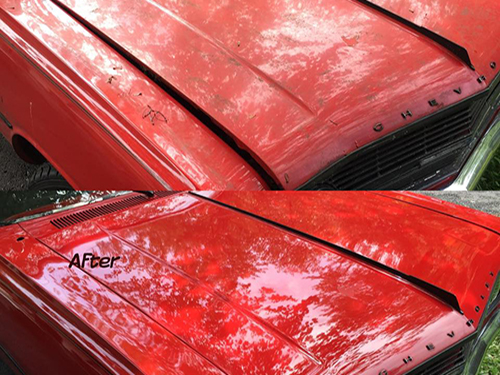 Paint correction techniques involve removing and re-leveling 1 to 2 microns of your clear coat using an abrasive method, and then buffing it back out to a shine; however, when you realize that a standard sheet of typing paper is approximately 97 microns, it is a little less terrifying than it sounds. In fact, it makes sense to remove that damaged layer of the clear so the paint can shine through as it was originally designed to do!

Now that you understand what causes the need for paint correction, you can understand why doing everything possible to prevent it in the future is equally as important as correcting it!

After buffing your newly corrected paint out to a brilliant shine, Galaxy Auto Detailing paint correction specialist Hang Lee move to protect it using either a long-lasting wax sealant or a new semi-permanent coating that actually repels dirt and scratches for several months at a time.

Over time, your vehicle will still require lighter, periodic paint correction as fine scratches and even swirls re-appear over the natural lifetime of your vehicle. However, with Hang monitoring the health of your car’s exterior, your vehicle will remain shiny for longer lengths of time, and with less intensity thanks to regular cleanings, wax or wax sealants, and coatings.